Rakesh Jhunjhunwala, the billionaire investor, added to his biggest holdings like jewellery-to-watchmaker Titan Company Ltd. and drugmaker Lupin Ltd., according to stock exchange filings. He also bought 15 lakh more shares in Sanjiv Goenka-promoted IT outsourcer Firstsource Ltd. Solutions. His holding in Fortis Healthcare Ltd. was not reported in the December quarter—Jhunjhunwala owned 1.54 percent in the hospital chain in the three months ended September.

Holding of Rakesh Jhunjhunwala in these stocks is not known at present:

Investment maestro Rakesh Jhunjhunwala ’s ability to pick multi-bagger stocks needs no elaboration, as in 2017 alone, many of his top bets have more than doubled investor wealth. These include his favourite scrip Titan Company returning 161%, Delta Corp Ltd shares which returned 170%, shares of Dewan Housing Finance which surged by 142% and shares of Escorts Ltd which zoomed 158%. What sets the man apart from other investors in the stock market? In his own words–ability to take risk. “One thing which keeps me apart is that I have got guts. I may have Rs 1,000 in my bank but if I think the deal is worth a crore – I will do it. I have guts and setbacks don’t put me off. I feel them for 10 minutes but then I am ready to fight back,” Rakesh Jhunjhunwala explained in a recent interview with CNBC TV18. We take a look at the what the big bull of Dalal Street is betting on, of late.

Rakesh Jhunjhunwala has reportedly bid for Star Health & Allied Insurance, the first stand-alone health insurance company. According to a report in the Times of India, Star Health & Allied Insurance carries a price tag of $1 billion. Interestingly, the company has also received bids from Azim Premji-led PremjiInvest, besides six other companies who are eyeing the insurer. The newspaper reported that bids were received from Kedaara Capital, WestBridge, Temasek and Prudential and strategic investors including ICICI Lombard and HDFC General Insurance. The management headed by V Jagannathan, former CMD of United India, has driven the company to be one of the profitable insurers in the health space. Besides, with a slew of insurance companies getting into the public float mode, shareholders feel the timing is perfect for a sale, said the report.

Earlier last week, Rakesh Jhunjhunwala had reportedly teamed up with billionaire investor Radhakrishnan Damani to bid for Binani Cement, a company which is facing bankruptcy proceedings from its lenders. “The partnership between Jhunjhunwala and Damani is a big surprise,” the Economic Times had reported a source as saying. Interestingly, in a recent article interview featured in Firstpost, Rakesh Jhunjhunwala had revealed that the D-mart founder Radhakrishnan Damani has made a lasting impact in his life. Notably, lenders had reportedly made a claim of Rs 3,884 crore on the company. This includes loans acquired by Edelweiss Asset Reconstruction Company from banks and dues to State Bank of India, Canara Bank and Bank of Baroda. This apart, the company also faces claims of Rs 2,429 crore from IDBI Bank and SBI in the form of corporate guarantees.

In December-17, ace investor Rakesh Jhunjhunwala had picked up equity stake worth Rs 180 crore in Mumbai-based gaming startup Nazara Technologies. Frequently referred to as India’s Warren Buffett, Rakesh Jhunjhunwala had earlier stayed away from the e-commerce and digital space in India, citing concerns over valuations, business models and a lack of cash flows. “Most of the big companies globally have been built from the profit of cash flow and not investors’ money. I would like to see online companies with a profitable model and there isn’t any. I will believe in it when they sell at an economic price,” Rakesh Jhunjhunwala had pointed out in Retail Leadership Summit last year.

So what’s making him bullish on Nazara? “I am always on the lookout for promising companies which are leaders in high growth verticals. Nazara is a leading company in the mobile games business. Nazara has a consistent track record of delivering profits, cash flows, along with efficient use of capital and high ROE. I see a growth potential in the company,” Rakesh Jhunjhunwala said.

Ace investor Rakesh Jhunjhunwala is known for his ability to pick multibaggers, and one such stock, the shares of Edelweiss Financial Services has more than tripled investor wealth in 2017. Rakesh Jhunjhunwala’s has now increased his stake to 1.1% or 1 crore shares in Edelweiss Financial Services, as at the end of December-17 quarter from 1.05% stake as at the end of September-17, data from BSE showed. The shares were trading at Rs 288.4 on NSE this morning. Translated at current prices, Rakesh Jhunjhunwala’s stake amounts to Rs 288 crore.

Global brokerage firm Credit Suisse is bullish on the shares of Edelweiss Financial Services, after the company reported stellar Q3 results for the quarter ended December-17. Edelweiss Financial Services reported 52.33% jump in consolidated net profit at Rs 236.39 crore for the third quarter ended December 2017, as compared to Rs 155.18 crore in the corresponding quarter a year ago. Credit Suisse has raised the target price on the shares to Rs 340, from Rs 330 earlier. The firm’s target price implies an upside of more than 18% from the current market prices. Credit Suisse says that the company continues to offer high earnings growth visibility. Total revenue increased by 29.07% to Rs 2,081.33 crore in the said quarter from Rs 1,612.47 crore in the December quarter of 2016-17, the company said in a BSE filing.

Credit Suisse said that the company may be looking at acquisitions as activity levels picked up in bankruptcy processes. “We are very bullish about SME lending in particular, we are greatly excited about the scaling up of our wealth management businesses and the increasing contribution they are making without requiring additional capital,” EFS chairman Rashesh Shah said in a statement.

Income from the company’s fund based business which includes lending to small and medium enterprises, mortgages and loans against securities also increased 23% to Rs 1,386 crore in December 2017 from Rs 1,130 crore a year ago.

Rakesh Jhunjhunwala has reportedly bid for Star Health & Allied Insurance, the first stand-alone health insurance company. According to a report in the Times of India, Star Health & Allied Insurance carries a price tag of $1 billion. Interestingly, the company has also received bids from Azim Premji-led PremjiInvest, besides six other companies who are eyeing the insurer. The newspaper reported that bids were received from Kedaara Capital, WestBridge, Temasek and Prudential and strategic investors including ICICI Lombard and HDFC General Insurance.

Jhunjhunwala’s investments are followed very keenly by institutional and retail investors, alike. While some follow him blindly, an online stock advisory firm Niveza uses his picture to advise investors on stocks, which are allegedly picked on the basis of his strategy. So what is his stock-picking mantra? Jhunjhunwala says, he looks at growth, valuation, liquidity, and the company’s cash flows. “I pay a price for picking the wrong companies too. When I buy companies, I am adopting them. If they don’t deliver, then I have made a mistake in choosing them. It is true that some companies approach me, which I assess. Others, I choose.” Some of his friends claim that when he believes in a story, he backs his conviction with large sums of money.

For instance, he owned substantial stakes in Bata and McDowells because of the size of the opportunity. He has since exited these stocks, and not with a very substantial gains. Time, he claims, has taught him not to be dogmatic. “Not being dogmatic has helped me become a better stock-picker. You have to accommodate others’ point of view,” he adds. His friend Kalpraj Dharamshi says, that he always takes contrarian calls, because that is where the opportunity lies. If a stock has been discovered by the market, then the valuation will reflect that.

Investment wizard Rakesh Jhunjhunwala’s success in the stock market may have inspired many investors, but there’s a top hedge fund manager who has won the ace investor’s admiration. In a recent interview to Firstpost, Rakesh Jhunjhunwala revealed that he admires top hedge fund manager Stanley Druckenmiller as an investor. Notably, Stanley Druckenmiller had worked alongside George Soros from 1977 till 2000. The duo famously bet against the British pound in 1992 and made massive profits. He shut down his $12 billion hedge fund Duquesne Capital Management in August 2010, citing “emotional toll.” Interestingly, the fund had a stellar record, with an average annual return of roughly 30% and no single money-losing year on record. According to Forbes, his net worth stands at $4.7 billion as on date.

While Rakesh Jhunjhunwala admires Stanley Druckenmiller as an investor, there’s another billionaire investor who has had a lasting impact on his life. In a recent article interview featured in Firstpost, Rakesh Jhunjhunwala says that Radhakrishnan Damani has had a lasting impact in his life. Yes, it’s Radhakrishnan Damani, the founder of Mumbai-based hypermarket chain, D-mart, whose IPO received a blockbuster response, getting subscribed by more than by a staggering 104.48 times at the end of the three-day bidding in March-17.

Interestingly, shares of billionaire Radhakrishnan Damani-led Avenue Supermarts, which runs the D-mart chain have returned more than 380% since its public offer in March. The market outperformance of the shares had led Ashburton Investments, a prominent investor in Infosys say that it missed the bus on D-Mart. Notably, billionaire investor Radhakishan Damani, ranked 12th on Forbes India Rich List 2017, with a net worth of $9.3 billion.

Earlier this month, Rakesh Jhunjhunwala had reportedly teamed up with billionaire investor Radhakrishnan Damani to bid for Binani Cement, a company which is facing bankruptcy proceedings from its lenders. “The partnership between Jhunjhunwala and Damani is a big surprise,” the Economic Times had reported a source as saying.

The recent stock selloff triggered by liquidity worries in the debt market has eroded more than a tenth of the value of top bets made by billionaire investor Rakesh Jhunjhunwala. 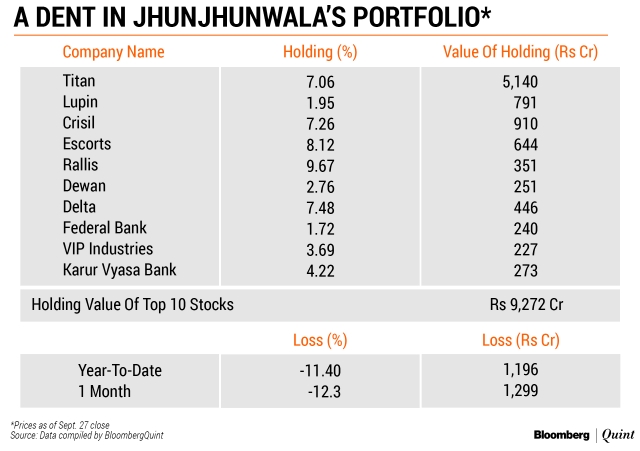 Dewan Housing Finance Corporation Ltd., which plunged amid worries stemming from IL&FS defaults, is the worst performing stock of the month and the year so far in Jhunjhunwala’s portfolio. That cost him Rs 325 crore in just a month. For the year, Titan Company Ltd., Jhunjhunwala’s biggest bet, lost the most - Rs 418 crore.

In contrast to the performance of Jhunjhunwala’s top bets, the benchmark Nifty 50 index has returned more than 3 percent gains.


Jhunjhunwala did not respond to BloombergQuint’s email queries.

RJ Portfolio: Laggards This Year
Dewan Housing Finance: The stock has fallen 50 percent on higher yields on its commercial paper.

Federal Bank: Fell 35 percent due to recent floods in Kerala, as it’s one of the largest private banks in the state.

Rakesh Jhunjhunwala Portfolio stocks down 75% in 2018

Many mid-cap stocks in Rakesh Jhunjhunwala’s portfolio stocks lost up to 75 per cent.

This has resulted in notional losses and a fall his portfolio value below Rs 10,000 crore mark.

A study on 27 of his portfolio stocks suggested that all except three stocks – FirstSource Solutions (up 51 per cent), VIP Industries (up 17.63 per cent) and Lupin (up 1.80 per cent) – have offered negative returns this year.

8 Jhunjhunwala stocks down over 50%

Return to “Portfolios Of Famous Investors”